Apart from English language being the country’s international language, pidgin is also a lingua franca that was common among non-literate persons and street vendors who could not speak the formal English. Nowadays however, the majority of the country’s population including the rich, poor, literates and non-literates all speak Pidgin English which is a mixture of English and other slang words. Nigeria is also famous for its English language literature.

The Nigerian music constitutes a diverse array of folk and popular music, some of which are known worldwide. Traditional musicians use a number of diverse instruments, such as the Gongon drums. Some other traditional cultural expressions are found in the various masquerades of Nigeria, such as the Eyo masquerades, the Ekpe and Ekpo masquerades of the Efik/Ibibio/Annang/Igbo people of coastal south-eastern Nigeria, as well as the Northern Edo masquerades. The most popular Yoruba wooden masks are the Gelede masquerades. A very important source of information on Modern Nigerian Art is the Virtual Museum of Modern Nigerian Art operated by the Pan-African University, Lagos.

From the 1990s the Nigerian movie industry ‘Nollywood’ emerged as a fast-growing cultural force all over the continent of west Africa.  Nigerian movies are very popular all over the country and increasingly so even in the conservative north. A foreigner who might be interested in watching Nigerians films should look Tunde kelani films up, especially SAWOROIDE or Tade ogidan films. And for modern music with genres of pop, hip-hop or rap, D’banj, P-square, Terry G, Banky W, Tu face and Naettto C. Western music, clothes and movies are also popular.

Soccer is extremely popular throughout the country and especially among the youths. Professional international soccer has developed into a cult of unity and division. Supporters of English football clubs for example, Manchester United, Arsenal, Liverpool and Chelsea often segregate beyond the traditional tribal and even religious divide to share their common cause in Premier League teams. The Nigerian national football team, the Super Eagles, is controlled by the Nigerian Football Federation (NFF). According to the FIFA World Rankings, Nigeria ranks 22nd and holds the third place among the African nations after Cameroon (11th) and Côte d’Ivoire (16th). The highest position ever reached on the ranking was 5th in April 1994.

Nigerian foods embellish a rich blend of traditionally African carbohydrates and soups. The foods are spicy especially in the western and southern parts of the country. Since the culture is dynamic, some Nigerians however do not like spicy foods. Some examples of traditionally Nigerian dishes are eba (garri), pounded yam iyan and fufu eaten especially with soups like okra, ogbono, egusi and other vegetable soups made from native green leaves. Yam is either fried in oil or pounded to make a mashed potato-like porridge, pounded iyan. Praised by Nigerians for the strength it gives, garri, a powdered cassava grain which is quite cheap, can be readily eaten as a meal. Nigerian beans, a variety of beans, is prepared in various ways and is also widely popular. Meat is also widely eaten in the country and the Nigerian suya, a barbecue like prepared meat, is a well known delicacy. In addition, bush meat, meat from wild game like deer and giraffes is also popular.

Fermented palm products as well as cassava are used to make a traditional liquor, Palm Wine.

New Reports about the ease of doing business in Nigeria 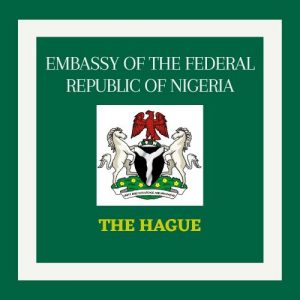 Please note that effective from June 15, 2021 we regret to inform you that appointments for issuance/re-issuance of passport is no longer possible until further notice. Those with previous appointments can reschedule any existing appointment as soon as the Embassy resumes enrollment and issuance services.

We will keep you informed through this website of any updates.

Due to technical problems, the embassy may not be able to issue Urgent Passports Request to applicants effective from 15th June, 2021 until further notice.

Kindly check this website for any updates regarding when it is possible to resume urgent passport issuance.

The embassy neither charge fees for scheduling appointments, nor employ the services of any third party to facilitate passport appointments and other related activities.

APPOINTMENT FOR OUR SERVICES IS FREE!!

Appointment for Passport will only be honoured on the basis of the presentation of valid application ID and Reference number.

This is to inform the general public that visitors are expected to schedule appointment for all categories of services being rendered by the embassy by using the appointment functionality.

Please note that there are no urgent passport issuance effective from Tuesday 15th June, 2021 until further notice.

Please come along with your face mask and be aware that ONLY the applicant will be allowed entry into the premises due to COVID-19.

We hope to have informed you sufficiently.